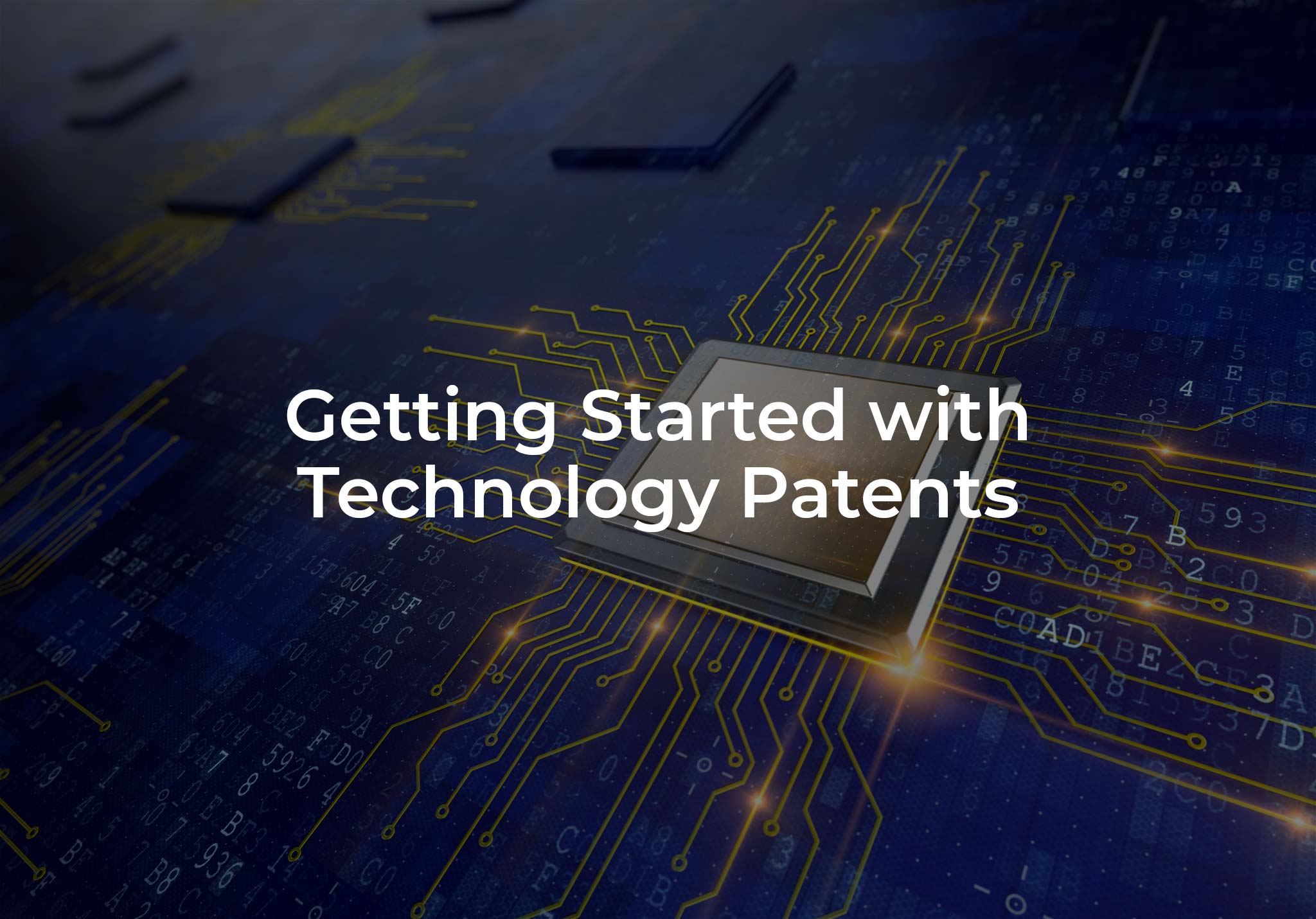 In today’s technological age, patents are more important than ever. The rapid integration of software, Artificial Intelligence, and robotics, particularly considering the recent global pandemic and a new “decentralized” work environment, has led to a surge in worker productivity and a continued technology boom.  The advancements in technology have resulted in higher employee output and productivity, creating better software tools and faster data processing.  As productivity continues to soar along with wages, the federal government and companies are investing billions of dollars in the digital economy and value chain.

As the current technology boom continues at a pace not seen since the late 1990’s, it remains essential that you protect your proprietary technology with one or more patent applications.  Yet many inventors ask where do I start? This article will provide you with all the information you need to get started in preparing technology patents. You will learn about the different types of patents available, what types of technology are patentable, and how long patent protection lasts.

So, whether you’re just starting out or are already familiar with patents, keep reading for insight on the best practices for protecting your technology with patents.

Can You Patent a Technology Idea?

Yes. Patents related to proprietary technology for products, designs, and processes are generally deemed patentable subject matter.  In today’s global economy the technology sector is driving strategic growth and innovation and has been at the forefront of driving transformational changes in humanity’s existence on Earth, with software, consumer electronics, semiconductors, and communications leading the way.

Many of the dominant technology companies provide incentives to their employees for developing and filing patent applications.  Typically, a company will assume ownership of the application through a formal patent assignment agreement (as agreed upon in an employment contract between the employer and the employee) but will compensate employee inventors with monetary rewards ranging from $500 to $5000 for each application filed. Subject matter can vary widely, even within a single company. For example, technology could vary from robotic, and drone assisted beverage delivery services to aquatic storage facilities.  The reason for this patent revolution is simple: tech savvy corporations have become increasingly aware of the value of technology patents.  For example, Blackberry recently sold all its “legacy patents” from its now defunct smartphone business for over six hundred million dollars!  On a related note, it is estimated there are over four hundred thousand patent claims directed at smartphone technology from Google, Apple, and Samsung alone.

This push by big tech to patent as much of their technology as possible has led to almost a threefold increase in the number of patent application filings year over year than were filed during the dot-com boom of the early 1990’s. This explosion of new patent application filings has predictably caused a lagging pendency time for newly filed applications of between 18-26 months before first office action is received.  According the to the United States Patent and Trademark Office (USPTO) there were 597,175 utility patents applied for in 2020, of which 352,049 were granted (58.9%).[1]

The reason so many tech companies are filing patents is simple: they understand the value of protecting their current proprietary technology and are focusing a substantial number of resources on protecting future technology and its distinctive features.  Though some of these patents may appear unorthodox, the real value is the incalculable market advantage they provide by creating a shield around their brand and technology, should the patents mature to fruition.  In light of the Apple v. Samsung case where damages were calculated in excess of 2 billion dollars, to say patents are only worthwhile if you are considering pursuing litigation, or that patents are only used by big companies to create a monopoly, is an oversimplification. Patents provide companies of all sizes with several competitive advantages, including licensing, sales, legal deterrent, and other factors.

In addition to the branding identity created for big tech and its employees who regularly file patents as a marketing asset, patents create immediate monetization strategies through licensing and acquisition.  For startups looking to attract investors and build a defensive intellectual property strategy around their innovation, a patent may provide a blanket of assurance to potential investors and help swing a weary venture capital group into a seed round.

Types of Technologies that can be Patented

Software, electronics, and computer-implemented technology account for most of the utility patent applications filed in the last five years.   Each inventor must initially identify the novelty of their invention and articulate the functionality that has been developed with respect to their particular technology.  Without first understanding what features, functionality, or process are unique and novel and, in the case of software, tied to a machine implementation, an inventor’s ability to clearly claim the patentable subject matter will be severely impaired.

Whether drafting software patent claims for your new cryptocurrency, FinTech, or SaaS platform, it is important to understand the novelty of your invention, the “what”, the answer to which often requires a multi-perspective analysis.  Understanding the novelty included in any software platform or program is the key to a successful patent application. A great starting point is to determine what the unique features and functionality are that your software performs and to understand and be able to describe any technical problem that is being solved.  Once identified, you must be able identify any components, sub-components, or steps required to achieve the functionality, the “how”.  When analyzing these functional aspects of your platform, it may be helpful to examine the technical challenge that other platforms in the industry have encountered, and what technical solutions or functionalities you have developed that address or remedy these deficiencies.

At the same time, you should understand what will not qualify as patent eligible subject matter in order to help you and your development team identify forward-looking technologies.

Considering the experience and user interface features such as the screens, buttons, icons, toggles, and visual elements that create the entire user interaction is also important.  If your user interface is novel and creates a unique ornamental appearance, you may be able to protect it with a design patent application.

Technology companies also regularly seek patents on their electrical systems and electronic designs, devices, and systems.  When drafting a patent application for an electronic device or system, preparing well-illustrated electrical circuits or schematics that identify all electrical elements, their corresponding direction of current flow, and interacting components provides an invaluable representation and explanation of enablement for the USPTO Examiner.

When drafting a medical device patent, the key is to accurately describe each aspect of the innovation with respect to other aspects of the device and to consider possible workarounds and modifications. To learn more about medical device patents, see our article about Types of Medical Device Patents

How to Get Started with Technology Patents

While every technology and industry have unique challenges to the patent process, it is important to understand each section of a patent application and where you need to devote the majority of your time while drafting.  The claims of a patent define your property rights of any granted patent and are the most scrutinized aspect of any application.  However, one of the most overlooked sections, and arguably just as important as the claims, is the specification, which serves as the basis of interpreting the claims.  During the prosecution process, claims can be routinely amended to traverse rejections raised in an office action, but the specification can rarely be amended once your application has been filed.

Below is a six-step overview on how best to obtain your technology patent.

What are the Different Types of Patents?

The first step when beginning the patent application process is understand what type of application is applicable to your technology.  Utility patents are the most common type of application and are granted for new and useful machines, manufactures, processes, and compositions of matter, and useful improvement thereof and focus on the functionality of the invention.  On the other hand, design patents protect the ornamental appearance of the invention and not the functional aspects.

Examples of the Technology Patents

The Rapacke Law Group is a patent and intellectual property law firm built for the speed of startups, with business and patent attorneys experienced in the software, SaaS, and medical device technologies. No hourly billing and no charges for calls or emails. We offer startup, business, and intellectual property legal services for a transparent flat fee. Our experience ranges from helping startups in their infancy to advising established businesses regarding regulatory and intellectual property matters. Our lawyers have experience assisting fast-moving, entrepreneurial companies seeking legal counsel in company formation agreements, liability, equity issuance, venture financing, IP asset protection, and infringement resolution and litigation. Contact us to schedule a free consultation with one of our experienced attorneys.

If you found this article informative, please check our articles on Patenting AI in Software as a Medical Device Innovations and on Common Patent Eligibility Rejections for Medical Device Inventions for more information on patenting medical devices.