IPR Can Be Expensive, But Can Be Worth It 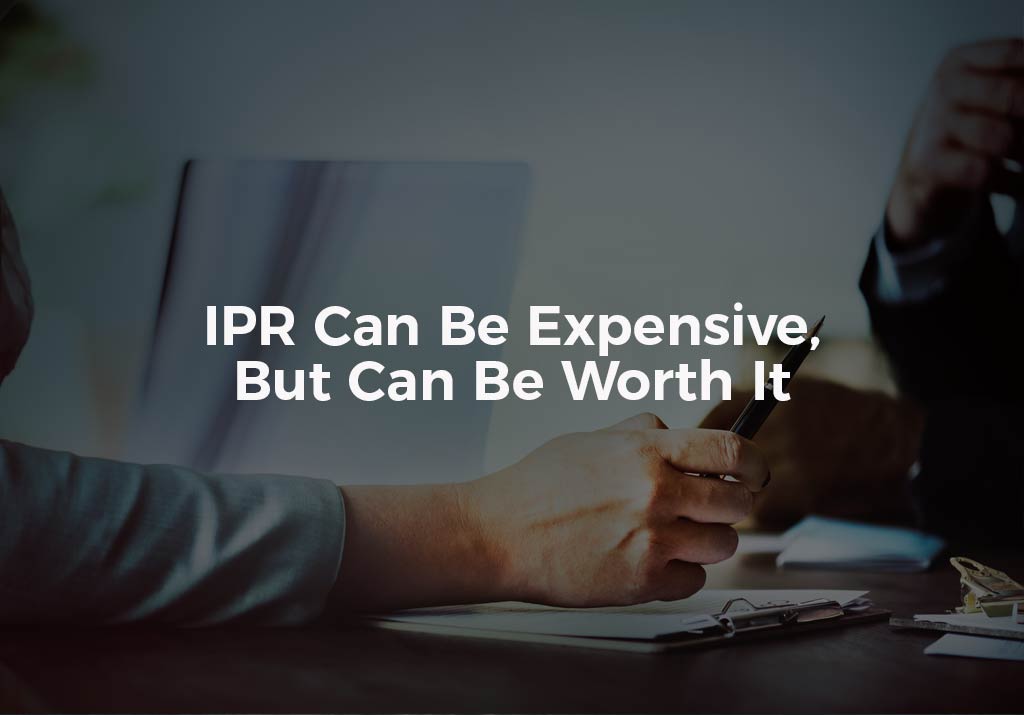 One of the most daunting aspects of an Inter Partes Review (IPR) proceeding at the Patent Trial and Appeal Board (PTAB) is the high cost. But the cost of an IPR often pales in comparison to the potential high and unpredictable costs associated with litigation in the Courts. While the price tag of an IPR might seem steep, the cost is linked to the actual aggregate costs associated with conducting the review of the contested patent claims by the administrative judges of the PTAB.

How Much Can An IPR Petition Run Overall?

The USPTO charges a fee of $9,000 dollars to initiate an IPR petition request. If more than 20 claims are challenged in the IPR petition, there is an additional $200 dollar fee for each claim over 20. If the PTAB decides to institute the IPR, the petitioner must then pay another $14,000 dollar post-institution fee. At the post-institution point in the IPR proceeding, for every claim over 15 there is an additional fee of $400 dollars.

But these are only just the fees charged by the USPTO. Hiring a lawyer to prepare the IPR petition and to perform any communications with the PTAB judges, prepare any necessary motions, conduct discovery, perform depositions, or to conduct an oral hearing before the PTAB will incur additional costs to the IPR petitioner. To keep attorney’s fees under control during an IPR, it may be beneficial and advantageous to work with a fixed-fee law firm, like The Rapacke Law Group.

According to the AIPLA Report of the Economic Survey for 2017, the total average cost for an IPR petition through institution and to final decision costs around $350,000. If the IPR decision is appealed to the Federal Circuit, the cost can easily increase by an additional $100,000-$150,000 dollars.

IPR Can Be Worth The Cost

For many patent challengers, there is a lot of value that can be extracted from an IPR in order to help justify the high cost. For instance, IPRs offer a relatively quick resolution. While it usually takes the PTAB about six months to consider whether an IPR petition should be instituted, i.e., the IPR petition is granted by the PTAB, once an IPR is instituted the PTAB is required to render a final written decision within one year. This one year deadline can be extended by up to six months by the PTAB for good cause. This relatively rapid turnaround on a decision regarding patent invalidity can be immensely valuable to a business that is challenging the validity of a competitor’s patent, especially when time that the patent is considered valid translates to lost sales. When potential lost sales equates to millions of dollars, IPR seems like a small price to pay to quickly dispose of a pesky competitor’s patent.

Want To Discuss Whether IPR Is Right For Your Business?

If you think that IPR might be a good option for your business, you can contact one of the IPR lawyers at The Rapacke Law Group. We can assist you with preparing an IPR petition or can help you with any other IP-related matter you may have. Contact us today.