Is IPR A Better Option Than Fighting for Invalidation of a Patent in Court? 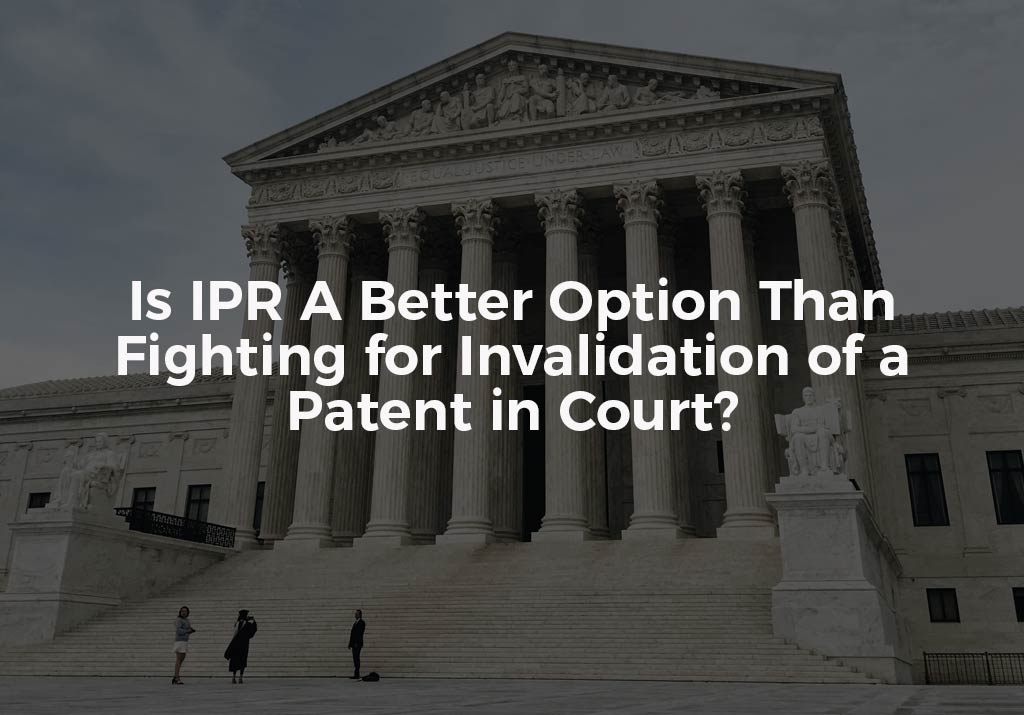 When it comes to seeking the invalidation of an issued patent, many find themselves weighing their legal options. There are two main options when trying to invalidate a patent – either through a post-allowance grant review process, such as Inter Partes Review (IPR), which conducted by the Patent Office, or through litigation in court. The decision should not be taken lightly as there are many pros and cons to each option.

IPR Is A More Limited Procedure, While Litigation is More of A Free-For-All

IPR offers a limited procedure for patent invalidation. For instance, the grounds for invalidity are narrower in IPR proceedings and are limited to only challenges made on the grounds of 35 USC Section 102 and 103 backed by prior art references that can only be either patents or printed publications. On the opposite end of the spectrum, when a case is brought before the district court, a whole slew of challenges can be made against a patent, ranging from invalidity on the grounds of any number of other Section 102 statutory bars to patentability or Section 112 failings, to unenforceability due to something like inequitable conduct.

There is something to be said about how IPR tends to favor patent challengers. Specifically, the burden of proof in IPR proceedings is a mere preponderance of the evidence standard, which is a lower threshold than the evidentiary standard used in court, which is a clear and convincing evidence standard. Additionally, claim construction by the PTAB during IPR uses a broadest reasonable interpretation standard, whereas the courts use a “ordinary and customary meaning” standard during claim construction.

In terms of direct costs in a side-by-side comparison analyzing just the matter of patent invalidity, defending against infringement claims in Court by raising an invalidity defense is roughly the same as the cost for filing an IPR petition, with some IPR attorneys reporting that the cost of IPR is a slight percentage less than litigation defense, according to the AIPLA Report of the Economic Survey for 2017.

However, the reality about infringement litigation is that the lawsuit is hardly ever limited to just a single cause of action and a single defense. There are usually a myriad of other motions that can be filed, full-blown discovery, and a number of other possible defenses that could be involved in an infringement litigation and these additional factors tend to drive up litigation costs in a rapid and unpredictable way. The AIPLA Report of the Economic Survey for 2017 notes that the typical patent infringement suit with less than $1 million at stake costs on average costs more than $600,000 dollars, while the typical patent infringement suit with between $1-10 million at stake costs on average nearly $1.5 million to litigate. By contrast, the typical IPR procedure costs around $350,000 on average.

When Deciding If IPR Is Right For You, Contact Us

Anyone who is weighing the pros and cons of choosing between IPR and litigation should speak with a knowledgeable IPR lawyer about their circumstances. Additionally, for those who already find themselves a defendant in an infringement litigation, IPR might be a good way to exert some control over the situation. If you are considering filing an IPR petition, we at The Rapacke Law Group are ready and available to assist you. Contact us today to schedule a free initial consultation with one of our attorneys.